40 years of Runners' lab | The driving force behind our workshop

He was one of our first employees, has a pair of magic hands and knows everything about a shoe and its sole: Patrick Merckx is the beating heart of our workshop and knows the company inside out. Time to introduce him to you. “Jempi was a trainer in the athletics club where I was a member, so I regularly visited his shop to discuss my training schedules with him”, Patrick kicks off his story. “At the time, Runners’ lab had already employed someone in the workshop, but it was clear that that person was too insecure and reluctant to handle the machines and materials. Every time I stopped by, he would tug on my sleeve to help him. Of course, this didn’t escape Jempi. That’s how I quietly rolled into the business,” Patrick continues.

With a degree in electromechanics and a background in construction, it was always a given that Patrick knew how to work with his hands. Still, was he willing to take on the challenge of learning the craft of shoemaking? Since Patrick is still indispensable from Runner’ lab’s workshop, the answer to this question speaks for itself.

“I'm quite handy, which is very convenient in the workshop. If there is something wrong with a machine, I can immediately see where the problem lies. I am also that kind of person that only needs to observe once to be able to do it myself. Jempi taught me the principles of the shoemaking craft with the knowledge he acquired over the years. I learned the rest by doing and experimenting. I have been working here for 33 years now, but before that, I was already visiting Jempi and Lut’s job regularly. I can say I’ve watched Runners’ lab grow from the front row. I also saw Koen and his brother grow up. I can still see little Koen lying on the couch, drinking from his bottle that his parents wedged between the cushions. Jempi was busy serving customers in the store, and Lut had gone to work."

When Patrick thinks back to his early years in the workshop, he immediately bursts out laughing. The double garage where he could barely move or turn is in stark contrast to the large space he has now.

"Due to the lack of space, my workshop was moved to a double garage. You could see shelves stacked up to the ceiling filled with shoes, materials and all sorts of things. Every inch was used. If there was space for another shelf, it was added. With a grinder and mill in the mix, it was a puzzle to find a place for everything. There was so little space in the workshop that two people could barely pass each other. After a few years, Jempi asked me to measure all the nooks and crannies of the shop. It measured 200 m².” Well, that’s great, isn’t it”, Jempi said, “and now we are moving to a 600 m² store.” With all the extra space of the new location, my workshop was finally worth its name. After ten years, the claustrophobic feeling of the previous location was now completely in the past. The new place almost had an air of a spacious ballroom. Currently, the workshop I work in is almost the same size as the first store altogether.” 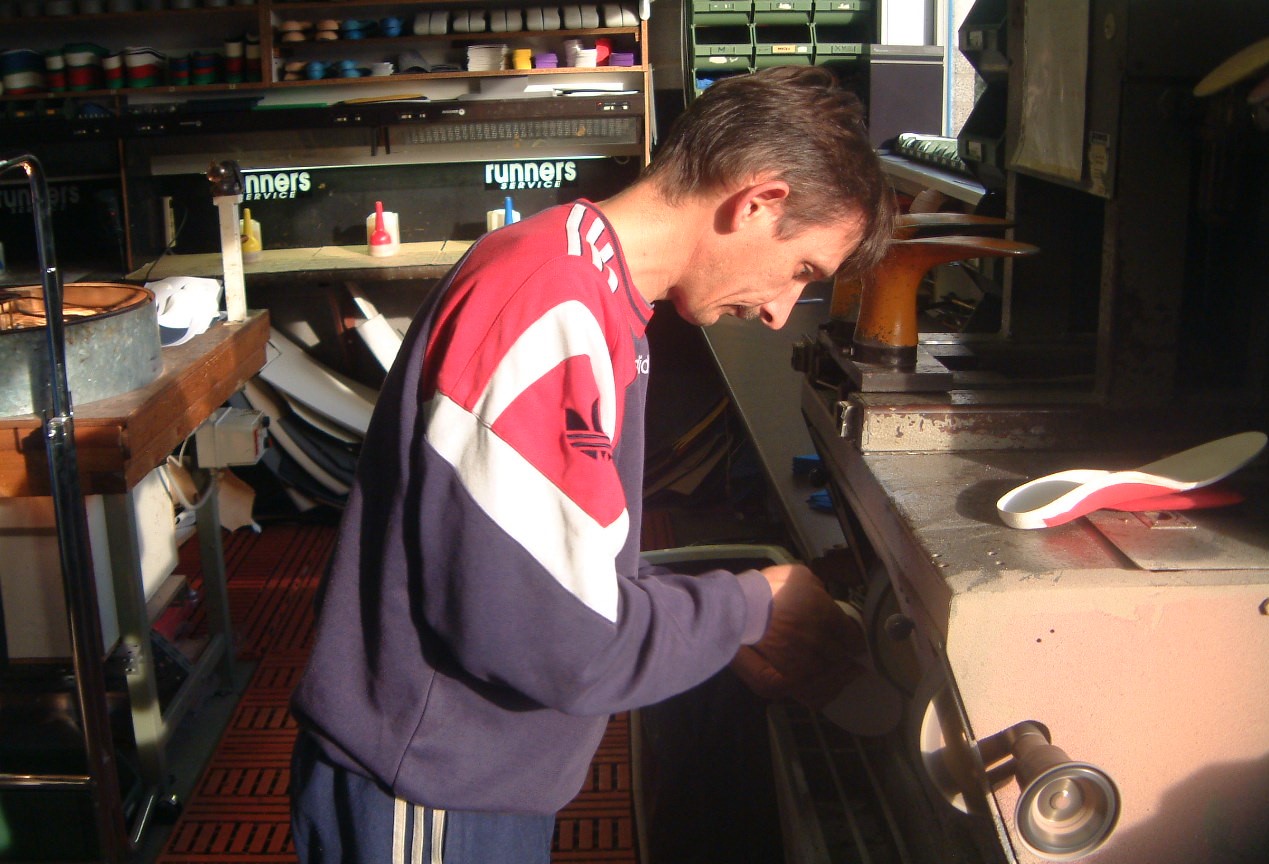 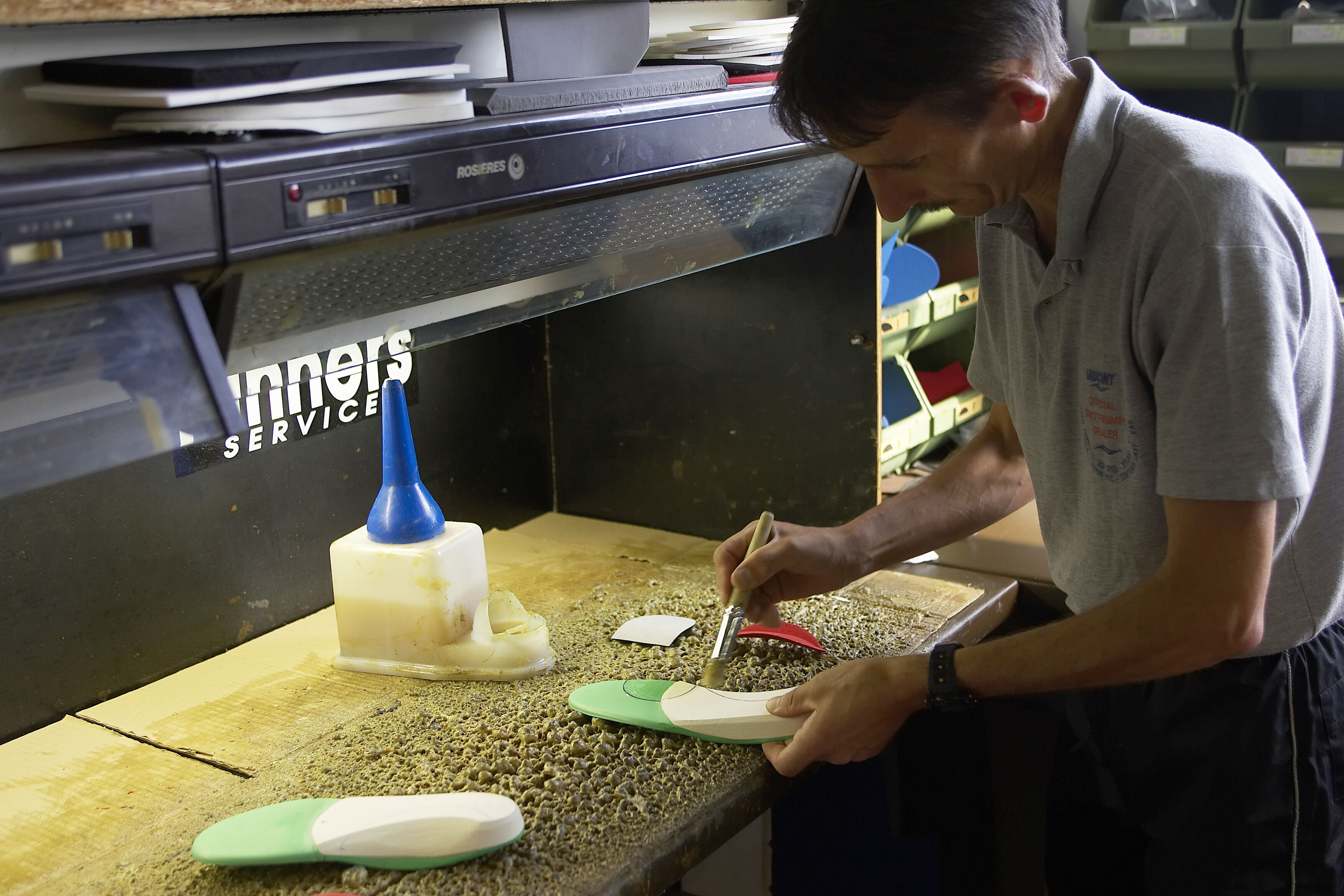 Making insoles is one of the tasks that Patrick has been perfecting over the years. He is never hesitant to experiment and continues fine-tuning the end product over and over again.

“Soon after we started, we were developing our own insoles, which we have patented by now. It used to be quite a job to make the orthotics. We soon developed our own last, but it still had to be pressed from plates and needed to be treated as well. Those plates were sometimes an inch thick. I can assure you that your hands are not particularly pleased when you have to cut such thick plates. If you add to that the whole process afterwards as well, you could easily spend 50 minutes for just one insole. After a few years, I came to the conclusion that we were often encountering the same supports and hollows. From that moment on, I started experimenting and creating designs for insoles myself. At one point, I had developed two types that just needed some enlarging and sharpening, but the design was as good as done. In the evening, during running training, I told Jempi what I had been up to. I told him that I had put something together and that, if we had it manufactured, we could easily save half an hour per insole. I immediately piqued his interest. The next morning, I arrived at work thinking of continuing my progress from the day before, but my design was nowhere to be found. I called Jempi, who told me that the design was already on its way to the factory and that it would go into production the same day. I hadn’t finished the details yet, I told him - I am very perfectionist in that regard - but he immediately replied that it was more than good enough. These models are now distributed in at least 60 countries.” 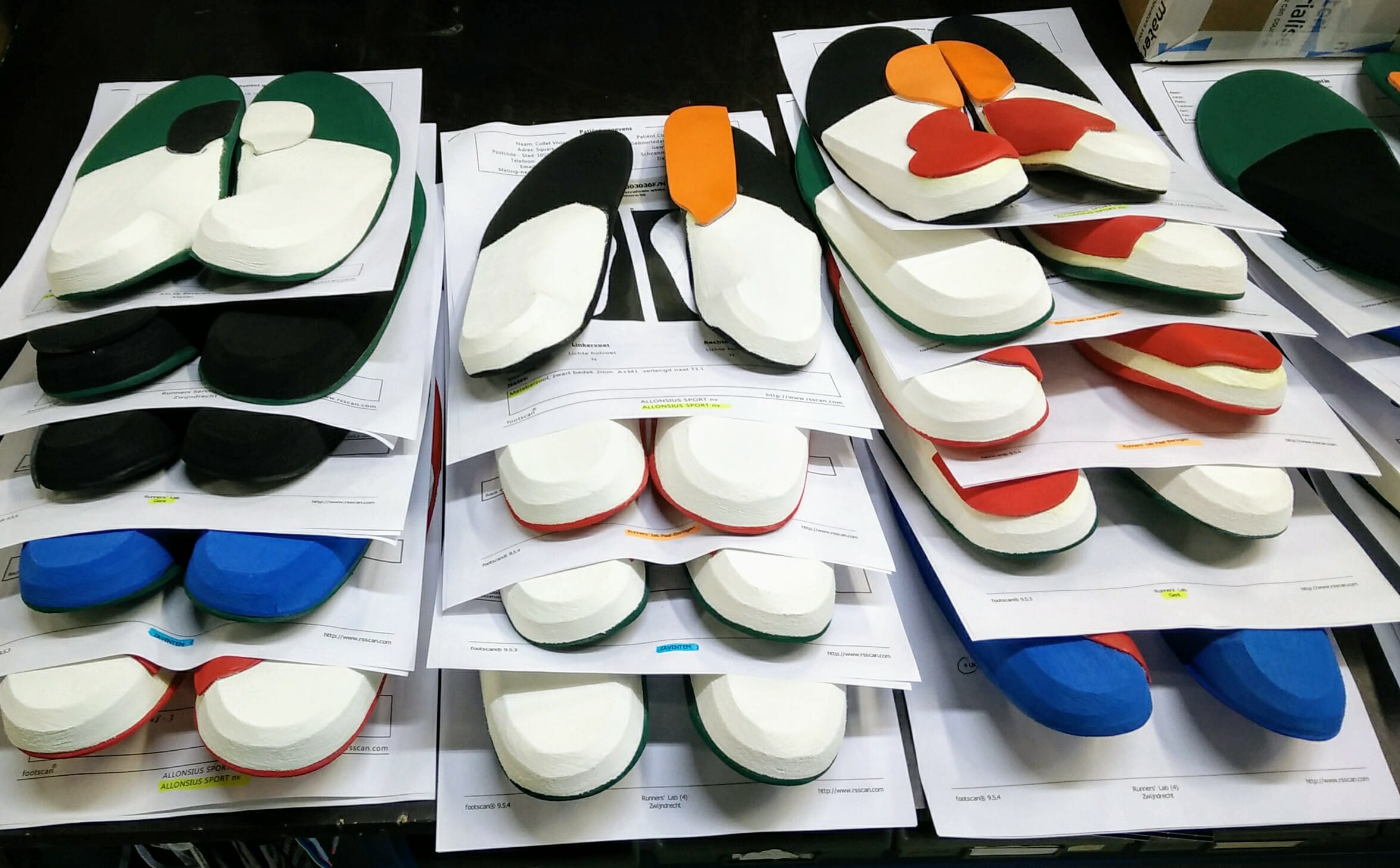 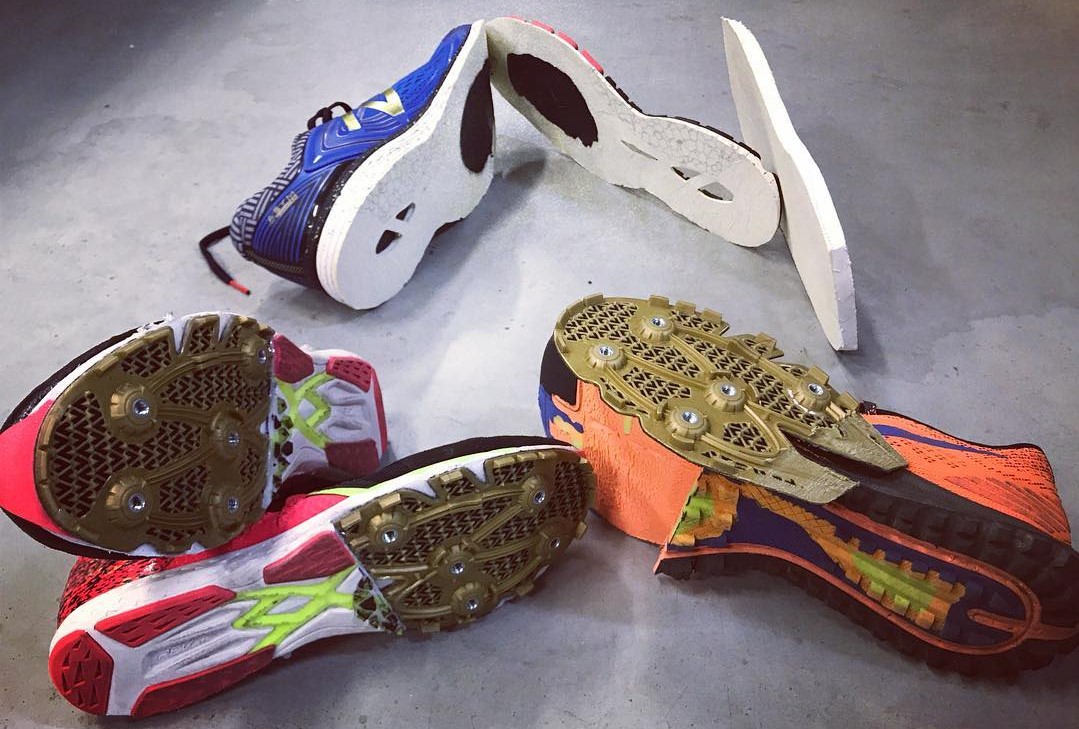 The greater the challenge, the more satisfaction

Despite what many people think, Patrick is always working on a thousand and one things at once and doesn’t limit himself to only manufacturing insoles. He has more than enough variety in his job, he says, as well as challenges. The greater the challenge he faces, the better he likes it. For Patrick, his job is therefore a hobby that he pursues with passion every day.

“Some think that I do the same work all day long. On the contrary, I just think I have plenty of variation. You will never hear me say that I ‘have to’ go to work. No, I CAN go to work. I know that I can help athletes so they can continue their hobby and that excites me. After all those years, a shoe has very few secrets for me. I can attach spike plates to them, raise shoes to compensate for a leg length difference, remove the sturdy heel counters to save the Achilles tendon, change studs on football boots, repair all types of shoes, remodel shoes and so on. Due to sponsorship obligations, athletes often have to wear a specific shoe brand. It sometimes happens that an athlete comes to me asking for a shoe conversion that preserves the outside look of the shoe they have to wear by contract but adds, for example, another brand’s sole. I like such alterations the most. Personally, in this job, great satisfaction plays an important role. The most peculiar memory I can recall is without a doubt that of a man with half-amputated feet. He struggled just standing up, let alone he could walk properly. He had a lot of trouble finding his balance because the pain meant he could only lean on his heels. I must admit I had my doubts, but of course, that didn’t stop me from taking on that challenge. Later on, when he came to get his shoes, he put them on right away and immediately discovered that he could finally stand painlessly on both feet. It is hard to describe the satisfaction I felt that day. Moments like that touch me, which is very motivating. Then, I started looking for new ways to improve, so that I could help him even better next time. There is always room for improvement.” 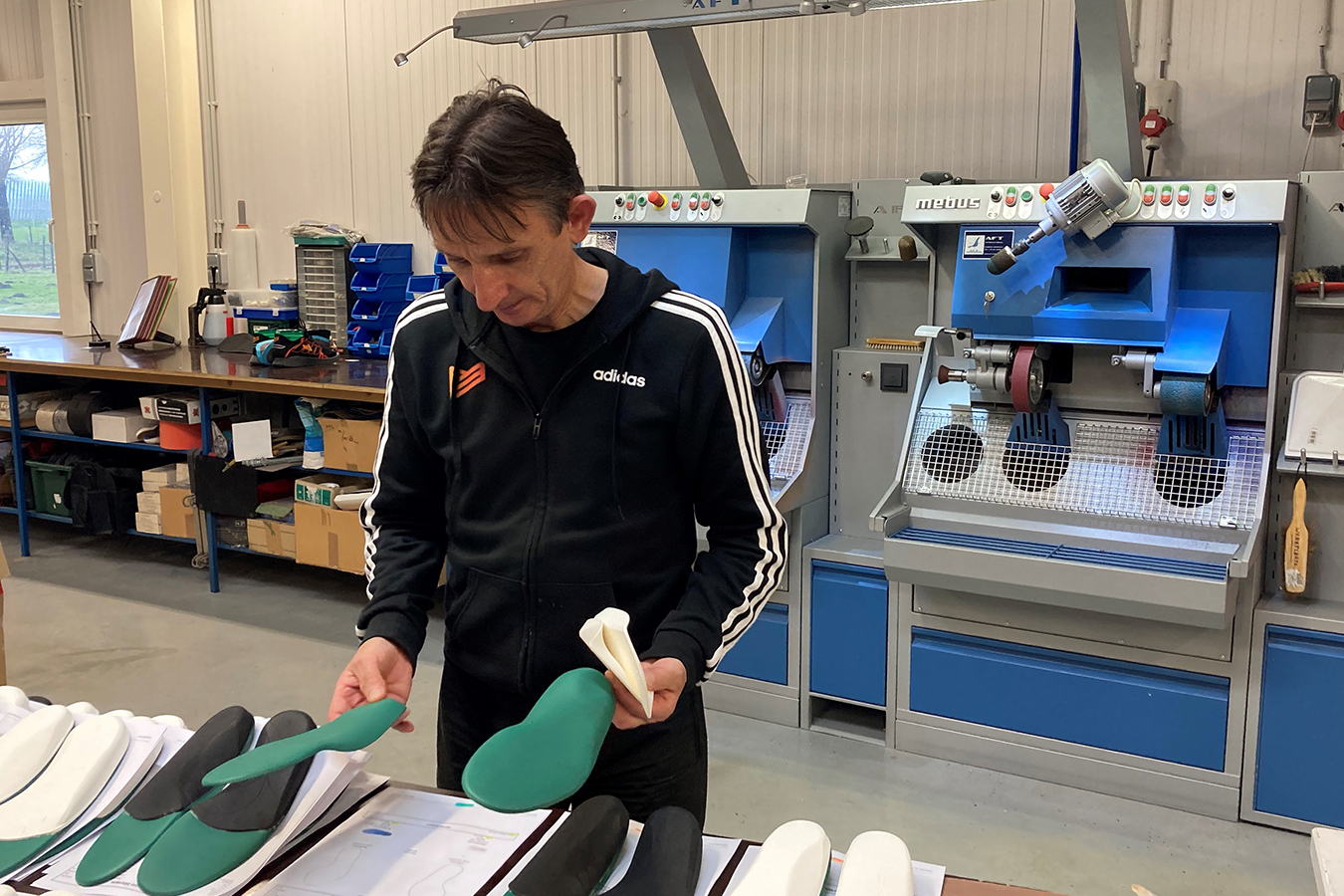 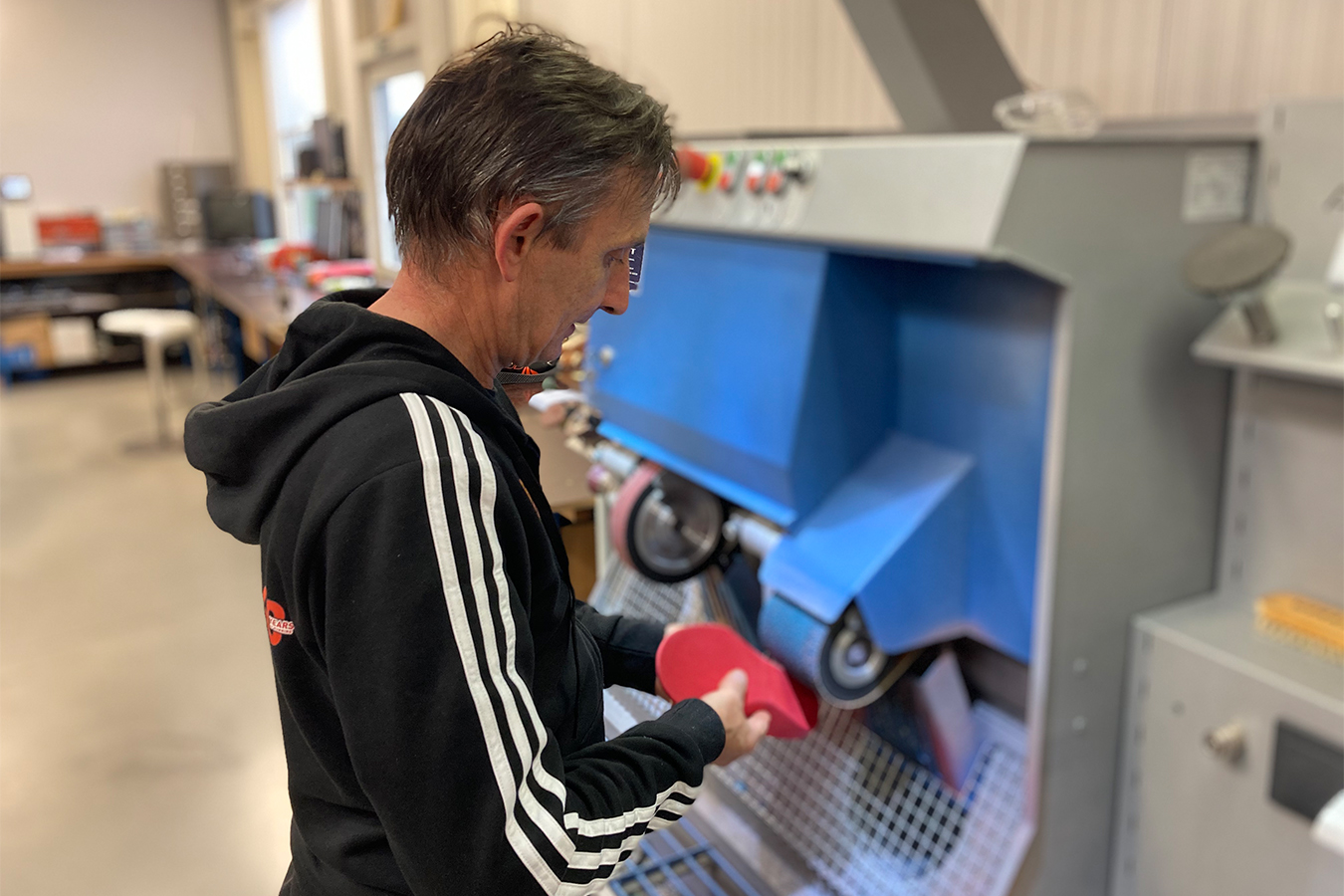 With all the technological advancements, it is getting more difficult to keep experimenting. Despite all the new technologies, Patrick does not think he should fear for his job anytime soon. With Abdi by his side, he certainly has a like-minded person with whom he shares a common passion.

“I can now make 1001 types of soles, so I have used most of my knowledge over the years. Still, I feel a lot will change in the shoe industry in the near future. We’re already anticipating that. 3D-printed shoes, tailor-made shoes, with built-in arch supports seem like the future to me. This project has been running for some time and I think it could be on the market in five years. Despite all this progress, I think a craft like this will always continue to exist. However, it will never be easy to teach someone everything in just a year. There is so much knowledge and experience involved. Not that I have already thought much about my retirement. No, I would find it difficult to let everything go completely. One day it will be necessary to train someone else. Fortunately, I have had Abdi at my side for years. I knew Abdi from the athletics scene and you immediately noticed that he is a good and willing boy, so I did not mind training him. In the early years, I often accompanied him to running competitions. I still remember me explaining the tactics to him before a track meet. “I’m knackered if I do that,” he said, insecure as he was. Still, during the competition, he carried out my plan to the letter. You must have seen him running in the turns! His opponents seemed to slow down compared to his acceleration. Abdi, who was running the 5,000m, even passed a long jumper that was approaching the sandbox. Jempi was watching in amazement, a very pleasant moment! It is nice to exchange our stories after all these years in athletics, also in the workplace. ”

Patrick was a very creditable athlete himself in the past, and still hasn’t lost his passion. If Patrick is not at work, chances are that you will catch him running in the area or the Ardennes. “I started athletics myself when I was ten, which means I have been running for almost fifty years now. I never stopped. Over the years, I moved from mediocrity to a front athlete. I used to run twelve times a week. Sometimes I would arrive at work and then there would be six customers waiting at the door to join me during my training session. I ran 150 to 170 kilometres a week every week. Once there was one week in which I reached 270 kilometres and then they had to tell me that it was enough. I could run a marathon under three hours a day because that was my endurance pace. I ran my fastest marathon in 2h26, although I am sure that I had it in me to run 2h17 during one particular race. Unfortunately, I was a bit too reckless at the time and could therefore forget a record time below 2h20. In the meantime, I have quit running competitions. Now I run to stay healthy and to have fun. I can really enjoy nature when I’m running. There is nothing I like more than a run in the woods, without music, so that I can hear the birds chirping and the wind blowing. Trail running is also something I enjoy doing. ”
Part 1: Jempi & Lut
Part 2: Koen 40 years of Runners’ lab | Who is responsible for our extensive product range?

For years, each product at Runners’ lab has passed their expert eye before entering the shop: Eddy D’Hondt and Natasja Vansteenkiste have been responsible for all our products for more than a decade. We would like to introduce them. Koen Wilssens was barely 28 years old when his father asked him to take over the manager position of Runners' lab. However, he did not hesitate for a second. “In life, you have to dare to take the jump, even if you don't know where you will land." ‘Runners Service Lab’ was founded in 1980. 40 years later, the small electronics store in Beveren-Waas has developed into a thriving running specialist store that currently bears the name ‘runners’ lab’.